Fortnite Season 5 has astonishingly reshaped the center of the Fortnite map. Ruins have been replaced with sand dunes filled with purple color rocks. There are various new locations added to the map. 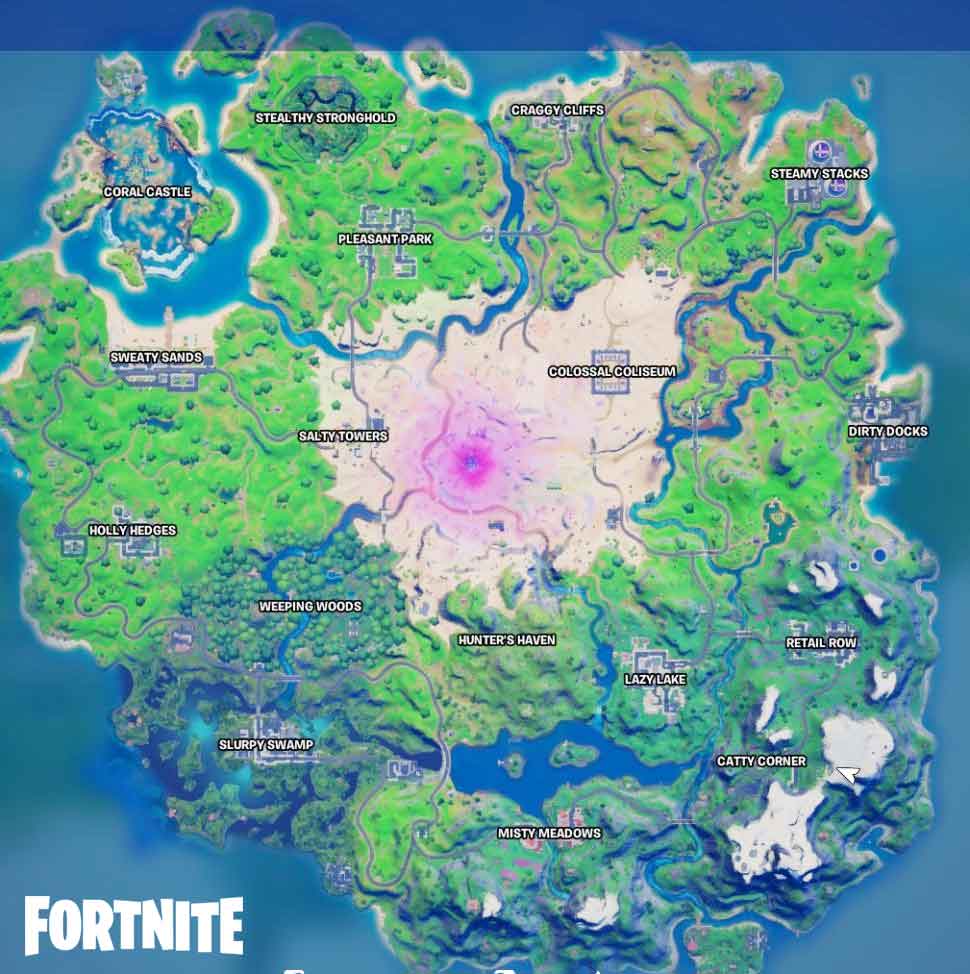 Zero Point is a big desert biome at the center of the map that contains a number of the other POIs. The bold players will want to move on because staying at a location will sink them. It is a good idea to hide from enemies, but it may ruin your perfect shot. You are unable to take a perfect head-shot.

It is a big forest biome enclosed by a wall. To be honest, it looks like Jurassic World. Rumors are in circulation that some dinosaurs can also be launched here. That could be a mind-blowing idea, but for now, it is a cool place to shoot.

As the name depicts, it is a giant greenish area beautified with the statues of Peely and a sandy battle pit. This place can be designed as a popular drop shot site. It might be tougher to get into the location.

Your favorite POI is back, but it has grown somewhat dusty. Like most of the zero point desert, this place is covered in sand. The sand can even sink you if you stand here for a few seconds. It is a perfect arena to circle around if you want to escape your enemies.

It is an unmarked POI near the Colosseum; the pizza pit is on the way to Farmers Market. The street outside is swamped with sand. The plentiful cover will surely bolster your arsenals during a match.

Better theatres are in the bumpiest Midwest malls. Risky Reels managed to survive the dimensional vortex, but not very well. It might be a favorite spot for all the players coming into the desert from the north.

Here you will find a Mancake. Featured in the battle pass, it is the sentient stack of flapjacks. It is a modest small restaurant sitting alongside the southern river leading into the zero point desert. A boat will likely spawn down the way.

The Mandalorian’s ship has had a heck of the time among the season two of the Disney Plus series and its arrival in Fortnite. It is located in the southeast of the Colosseum. The Razor Crest has already been featured in one of the Fortnite weekly Mandalorian challenges.

It is a sand shell partially filled with sand.

It is located in the Northwest of the Slurpy Swamp; this appears to be landed on the top of a store. However, there is nothing special about this place.

It has been a small addition south of Slurpy Swamp. The player will see a big toilet outside the fence. This is an unremarkable setting.

The rest of the Fortnite map is the same as before. Season 4’s various Updates have been removed, leaving behind a lot of space in the northeast region of the map.